A Historical Dirt n Dust Kicks Off With The Next Generation 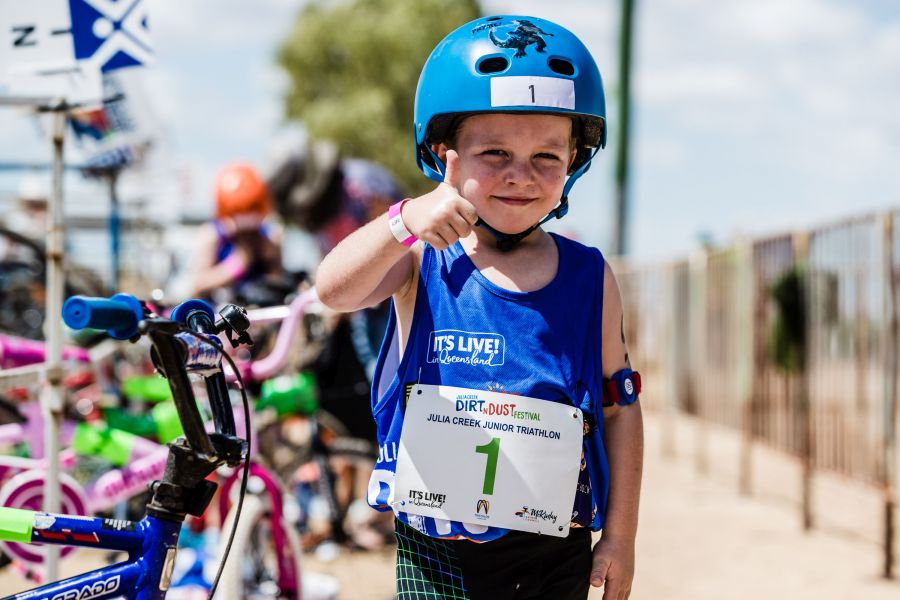 The Julia Creek Dirt n Dust Festival starts off this weekend with the next generation of tough little athletes vying for the title of Outback Queensland Toughest Junior Triathlon.

For 25 years the Julia Creek Dirt n Dust Festival has been churning out triathletes ready for Australia’s toughest sprint triathlon, but none are as tough as the competitors in the Julia Creek Junior Triathlon.

Competitors as young as four years old battle it out in a race that rivals its big brother. These mini-triathletes are gearing up to kick off the Festival this Friday afternoon.

Dirt n Dust Committee President Stephen Malone says that holding the event during the school holidays ensures the Festival remains an event for the whole family.

“The Dirt n Dust Festival really is a family affair, especially for some families, whose kids run in the Junior Tri while the parents tackle Australia’s tough sprint tri in the South 32 Senior event,” says Stephen.

“We hold the Festival during the school holidays to encourage families to head out west to experience Outback Queensland. It also gives kids a healthy activity to burn up all that school holiday energy!”

This year the Dirt n Dust Festival ran workshops for schools along the Overlander’s Way in preparation for the Junior Triathlon.

“We visited most of the schools between Townsville and Mount Isa,” says Stephen. “Running workshops with the students on team building and fitness.”

“We had a seasoned athlete who spoke to the kids about the upcoming triathlon and taught them valuable skills around triathlon transitions, as well as tips for the different legs.”

“The aim was to get them excited about exercise and the upcoming event. They can then bring those skills to the event and compete.”

Stephen says the workshops succeeded in generating renewed interest in the race, with nearly 100 juniors registered, up from last years numbers.

Reigning local champions of their age categories Noah Woodfield and Sam Pratt are returning this year to compete and defend their title.

“We are thrilled to see the next generation turning out in droves for the 25th year,” says Stephen.

“Who knows, maybe we’ll see these competitors bring their own children to the 50th.”