Dirt n Dust Golden Oldie To Give It Another TRI 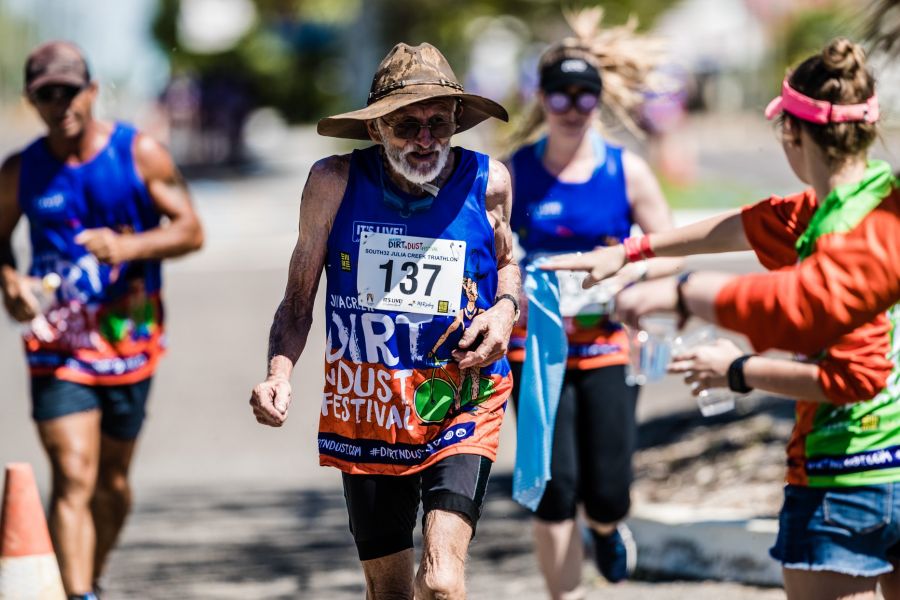 “The only problem is that I’m trapped in this athlete’s body.”

Each year, crowds jostle for a photo with this endearingly salt-of-the-earth character who has become something of a living mascot at the Julia Creek Dirt n Dust Festival – a three-day outback spectacular, which celebrates 25 years in 2019 as home to one of Australia’s toughest sprint triathlons, complete with mud, dust, heat and flies.

“I know they don’t have film anymore, but I reckon I must have earned a lot of money for Kodak, Fuji and all them over the years,” he says. “They should have sponsored me.”

At 83, Fred has lost count of how many times he’s made the pilgrimage to Julia Creek to compete in the triathlon alongside the likes of Olympians Brad Bevan, Loretta Harrop, Courtney Atkinson and Emma Jackson. In 2016, an age gap of 64 years separated him from the youngest entrant, at 16, after the event opened its senior triathlon to teenagers.

“I would have done Julia Creek at least 16 times,” says Fred, who first competed in triathlons and half marathons at the age of 56. “But there were a few gaps for a broken leg and bowel cancer.”

Not one to big note himself, Fred thinks nothing of having cycled 136km from Charters Towers to Townsville to compete in the inaugural Masters Games, back in 1995, pocketing three medals (gold in the triathlon, silver in the cross country and bronze in the half marathon), before hopping on his bike to ride home.

He is also humble about the fact he was awarded Senior Sportsman of the Year for Charters Towers during Australia Day celebrations in 2001.

“I’m no superhero or anything like that and I can’t swim for nuts,” says Fred, who runs, bikes and swims pretty much 365 days a year. A couple of months before the Dirt n Dust triathlon he heads into intensive training mode ‘practising’ the full course (800 metre swim, 25km bike ride and 5km run) at least once a week.

“I don’t break any records, but I just enjoy it and I’ve probably influenced a lot of people to take up a bit of sport.

“For years now, I’ve been the only one in my age group, and I always said I wanted to keep going until I was 80, but I’m still feeling good – I’m blessed that I’ve got my health and I just use it.”

The old sparky, who still holds an electrician’s license, first travelled to Julia Creek for work contracts 20 odd years ago. He was quickly adopted by the town of 400 people, which swells to 3,000+ in one weekend during the Dirt n Dust Festival, renowned for true outback hospitality and a good dose of larrikin charm. Think bog snorkeling, bull riding and even Australia’s Best Butt competition and you have one of a festival to put on your bucket list.

“I could probably win that you know,” jokes Fred of the best butt line-up.

Showing no sign of slowing down anytime soon, he’s chuffed at his resemblance to the Julia Creek Dirt n Dust mascot.

“As the years went by, people used to say I looked a bit like the mascot you see on everything. Yeah, that old ringer with triathlon gear on.

“So, I took it up. I cut my whiskers and wore riding boots… and then, of course, I got me red bathers.

“I’m part of the show now. Everyone expects me to be there.”

Visit www.queensland.com/events to discover all the action.