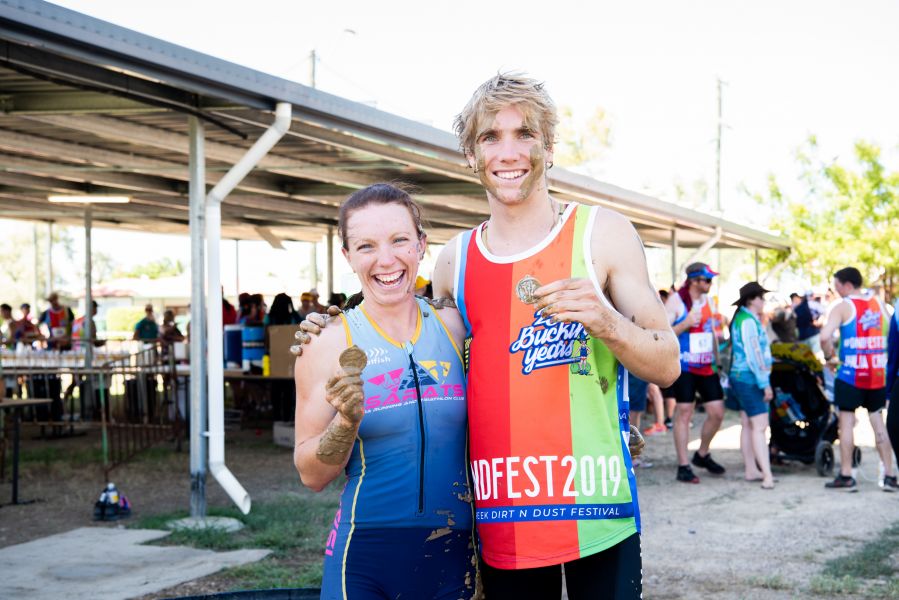 The Julia Creek Dirt n Dust Festival shines in its 25th year after concerns the devastating floods might call for cancellation.

“The fact that this event has gone ahead today after we were eight weeks ago is an absolute testament to the volunteers and the resilience and strength of our community,” said McKinlay Shire Mayor Cr Belinda Murphy.

The South32 Julia Creek Senior Triathlon is synonymous for being the toughest sprint triathlon course in the country. The event delivered once again this year with some of the harshest conditions yet, with 25km/hr described as “brutal”.

The event is a bucket list item on the triathlon calendar and continues to draw competitors from across Australia, with an 800m swim in the Eastern Creek, a 25km bike ride and 5km run. During the last 25 more than 4000 competitors have battled with the Outback conditions, with strong easterly winds at hour and humid conditions, the race did not disappoint in presenting competitors with tough challenges.

Townsville based winner Jye Spriggs said “It feels amazing to be the winner of the Senior Triathlon. The conditions are absolutely brutal, we had a 25km headwind out there on the bike. So it was really tough, it felt like you were going almost, but you had to keep pushing. And that’s what I did.”

over the line was Michael Adendorff from Mount Isa who came fifth the year before. Justin Bindley also from Mount Isa followed up with third place, smashing his previous placing of 22nd.

Female winner Kim Alcorn, another Mount Isa local, said “It was pretty rough out there - that headwind was an absolute shocker. I did definitely enjoy it, I love coming out to Julia Creek, this is only my second one so I’ll be back every year for as long as I can be.”

Cr Belinda Murphy, who ran in the triathlon this morning, said this event provides an economic boost for the community.

“This event is so huge for our community, not just socially but the economic impact for our small shire and everywhere across the North West is invaluable.”

Dirt n Dust Committee President Stephen Malone, says this event was the starting point for what Dirt n Dust has grown into.

“In the we only had a handful of runners, and we all thought they were crazy - running a triathlon in the Outback. But here we are 25 years later with over 250 competitors having just finished racing. Though I’m not entirely convinced they are still crazy!” he laughs. “But it’s certainly become a bucket list item for so many people.”