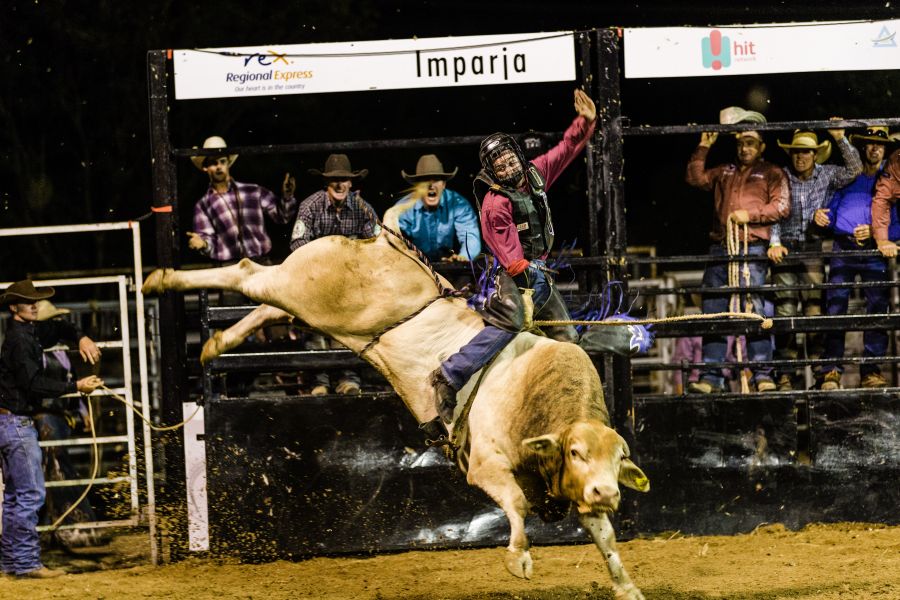 As the sun set on the second day of the 25th Anniversary of the Julia Creek Dirt n Dust Festival crowds flocked to the arena at Dirt n Dust Central to watch the raw adrenaline of the PBR Bull Ride.

29 riders held on, whitekuckled against their bucking bulls for the one-of-a-kind 25th Anniversary Buckle.

For the first time in its history the Dirt n Dust PBR Bull Ride secured three international riders, all hailing from Brazil. However it was a boy from Victoria’s high country that took out the top spot.

Will Purcell from Merrijig, Victoria won the night with a ride score of 87, beating out favourites like Cody Heffernan and Aaron Kleier.

“It always feels good to win,” says Will. “It was a young bull so I wasn’t sure what to expect, but he turned back, right at the gate and really bucked. He just fit my style and we made a good bull ride together I guess.”

The first time Julia Creek competitor says he didn’t know what to expect from the Festival but would love to return after his triumphant win.

“I’ve never been out this way before - the Festival has been awesome. They never really told us what we were in for but it’s been such a fun time,” he says. “I’d love to come back.”

Dirt n Dust Committee President Stephen Malone says that the PBR Bull Ride is one of the Festival’s most popular events, always drawing a fantastic crowd.

“People love the Bull Ride, so we are very proud to be able to partner with PBR to bring this adrenaline-pumping event to the crowds.”

The Julia Creek Dirt n Dust Festival is supported by the Queensland Government through Tourism and Events Queensland’s It’s Live! in Queensland calendar of events.